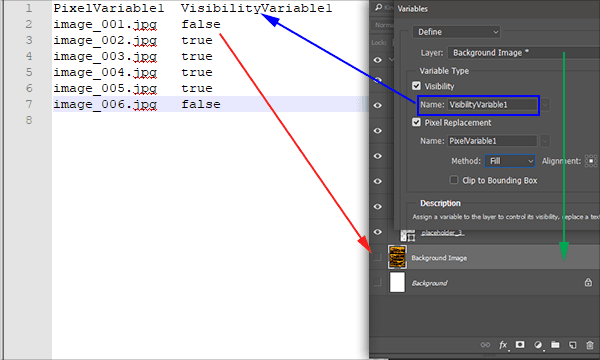 Data-driven graphics (Variables and Data Sets) is lesser known but very powerful automation feature in Photoshop. So far I have covered most of the options and tips how to use Variables and Data sets.  In this post, I will cover why and how to combine text substitution/pixel replacement variables with visibility variables.

This list can be expanded with more situations when it can be useful to combine text replacement or pixel replacement variables with visibility variables. Let's stop at above examples to proceed with basics which can be useful in real-world projects.

If you not familiar with data-driven graphics please read my previous posts to familiarize yourself with this functionality in Photoshop.

Here is how things work in short: you can assign variable to any layer/layer group beside Background layer. Data set contains the name(s) of the variable(s) in the first row and data in each other row. Data can be a path to an image file, text for substitution or true/false. When the name of the variable from the first column in data set and the name of the variable which is assigned in Photoshop to some layer/layer group match, data is passed to layer to substitute pixels, text or to show/hide that layer.

Visibility variable can be assigned to any layer or layer group including nested layer groups. For some type of layers (Adjustment layer, Smart Object layer) that's the only variable that is available to assign.

There is workaround when using Pixel Replacement and Text Replacement variables to make content on layer(s) invisible without assigning visibility variable but let's keep that for later.

You must have at least one regular layer in your document (besides Background layer).

Variables are backward compatible. The current version is CC 2018 and I have tested back to Photoshop CS6. Everything works just fine, document open in CS6 contains information about an assigned variable.

How to combine Visibility variable with Pixel/Text replacement variable

Note: you cannot leave value blank for Pixel/Text Replacement variable in external data set even if you do not want that image/text to appear on the layer. Point to file or type some text then set visibility variable to false.

Now you have a question: why use visibility variables anyway? You could just skip one row or leave the blank field in data set and deed is done! Well, first of all, you cannot leave the blank field in a column with a variable. Second: sometimes you will have a more complicated situation where you need to display image with overlay text while other files need to be exported without background (or any other) image. If you have assigned variable to some layer in Photoshop you must have that variable in data set and to provide data in each row/column in data set.

How to create data sets in Photoshop with visibility variables

There are two ways to use visibility variables. You can create data sets inside Photoshop or use external data sets saved as .txt or .csv file.

Here are the steps to create data sets inside Photoshop:

You can use software like MS Excel, Google Sheets or any text editor like Notepad++. The important part is:

I will use Notepad++ to create external data set. For a larger amount of data, you can use spreadsheet application like Excel or Google Sheets. Here are the steps:

How to load and preview external data set

In Photoshop you must have an open document with variables assigned.

How to export data sets

If you do not want to use visibility variables with Pixel and Text replacement variables.