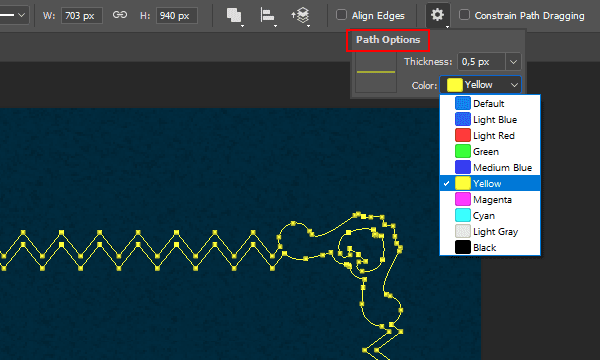 One of the new features in Photoshop CC 2018 is the ability to control the color and thickness of path lines. Paths can be useful to isolate objects, to clip images, to create a selection, to create vector mask and so on... One way or another you must work with paths in Photoshop: either you will be drawing them or use someone else's paths. In the previous versions, it was almost impossible to see path outline against some backgrounds. Starting with Photoshop CC 2018 release you can define line thickness and color for easier visibility while drawing paths. New features can be also useful when scaling, moving around, combining path outlines and so on...

Options to control color and thickness of path outlines

Here are the steps to control thickness and color of path outline in Photoshop CC 2018:

When working with Pen Tool and Curvature Pen Tool you will see and Ruber Band option which you can check to preview path segments as you move the pointer between clicks or anchor points.