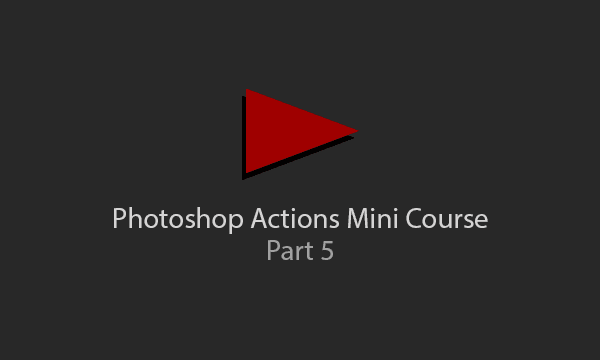 We will continue our journey with Photoshop actions. In this post we will cover how to test the recorded action. Testing action is one of the most important part in the process of creating successful Photoshop action and this topic deserve its own, separate tutorial. I will give you some guidelines and answers on questions: why and how.

The very first reason is to ensure that action is playing properly and delivers expected result. Sometimes it will be a very easy task while other times you may be forced to change and modify your action. Things are getting more difficult with complexity of action what does not simply mean number of steps, we have covered that in the previous tutorial. The second reason is the target audience. In case you want to distribute or sell your action, then you must think about the users. The third reason is compatibility. With each new version Photoshop is getting new features (commands) which wasn't present in the previous versions. There are some things to consider in case you want your action to play on localized versions of Photoshop or you want your action to be compatible with Photoshop Elements. As you may know, Photoshop actions can be used in Photoshop Elements but Elements do not have the exact same features as Photoshop.

The best practice to test an action

The success of the action and testing starts before you even start recording it. There are a couple of questions which you should ask yourself:

What problem you are trying to solve or what is the purpose of your action. More specific you are in defining action, the less time you will spend testing it.

Target audience is the second question. What is your target audience? Are you recording action for personal use or for distribution? When recording actions for strictly personal use you may stop asking questions. In case you want to provide actions to broader audience then ask yourself: what your target audience know about actions and what is the level of their experience with actions and with software in general. You may need to take into account that some users will download/buy your actions and that will be their very first experience with actions. Potential users may be or may not be familiar with Photoshop and its commands and features. You should take into account that the younger population expects lots of customization options. Professionals and hobbyist have different expectations. A professional will trash your destructive action without user input, non-destructive adjustments and Smart Object Layers while hobbyist may give you 5 star rating for the exact same action. Testing an action does not mean just to avoid error messages while playing action. It is common to offer and send action to target audience for testing and feedback.

Compatibility is the third question. In this section I will give you advice to think onward, not backward. Think about HTML panels rather than about CS6. If you are CC 2014 user and you think whether to use Flame filter, then use it, forget previous versions. Think about compatibility with localized versions and optionally with Photoshop Elements. Sometimes you will be able to provide exact same action for Photoshop and Photoshop Elements users while other times you should provide separate actions for a better user experience. There is no reason to not create a group from layers in Photoshop action or to allow Photoshop users to change settings for filter applied to the Smart Object layer.

How to test Photoshop action

Sometimes it is very easy and simple to test an action. You can install a couple of versions of Photoshop and/or Photoshop Elements and to run the action. You can ensure through a few steps at the beginning of action that everything will work fine (duplicate and close original, convert color mode, bit depth, flatten image). This is true for simple actions (that's my categorization explained in the Photoshop Actions Mini Course (Part 4) which can start with one single layer. You can also record actions which start from scratch with fixed or document size typed by user. You can also restrict use to certain document size, orientation or aspect ratio. In that case everything is well known in advance, you are basically creating and controlling everything in the document.

Things that can help you to test the action

The first thing you should consider doing is to split action in logical units. You can record several actions and even test everything while recording the action. At the end of the process, you can simply drag to join steps in one single action and deed is done. Example is to record action which will split image into equal pieces. Instead of recording one action from the start to end you can record 6 or 7 actions where each of the actions is creating one piece. This is a very simple example and you actually do not need to record each individual action, you can instead record one or two actions, duplicate them and to change one or two steps. It is simple as that.

Playback options
When testing action you can use Playback Options to play action with a pause of 1-60 seconds between steps. It can be very useful because you have time to follow changes in the document and to stop playing action at any time when the problem occurs.

Play multiple steps
You can select multiple steps (click on step to select it, then hold down Ctrl/Cmd or Shift and click on the next or the last step you want to select) and to play them using Play selection button.

Save actions as text file
There is an option to export or save actions as a text file. The trick is to hold down Ctrl/Cmd + Alt/Opt while saving action set. It will actually save all the available actions in the Actions panel, not just selected set. This is certainly not an option which many users will use, but let me mention and that.

Test complex actions
When testing complex and flexible actions like one I have provided for download in the previous post, you must go step further. In case you want to minimize instructions and increase efficiency, then you must predict in advance possible situations which may lead to action fail. It is not that difficult as may seem at the first thought.  There are a couple of situations that can occur: document may have only one layer, only one - Background layer, multiple layers or multiple and nested groups. You can offer action for testing or to send it to your friends or co-workers and to cross fingers. Another way is to create template(s) and to simulate all possible situations. That's what I did with actions from the previous post. My template is quickly created with a bunch of layers in groups and nested groups. The next step is to start selecting random layers or one by one and to run action. Here is a link to download test template and below screenshot how the template looks like. Action High Pass flexible will never fail while action High Pass flexible ver 2 may fail (download from here). Can you find a situation when High Pass flexible ver 2 action will display an error message and fail? 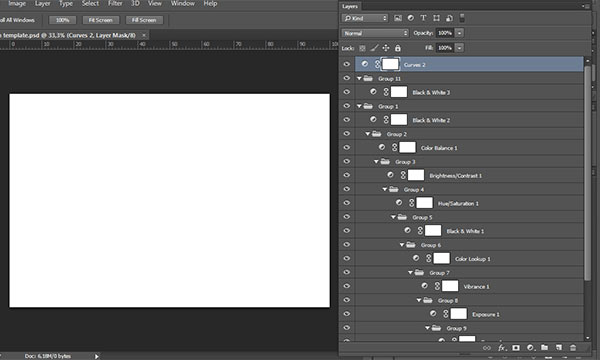 Once you find spots that are causing the problem you can re-arrange steps, modify or to record additional steps, including to duplicate existing steps from the current or any other action.

Simple solutions to modify and change steps
One of the simplest solutions is to delete step and to record it again. You can also simply double click on the command (does not work with all commands you can record in the action) and enter new values which will overwrite existing, recorded for that particular command.

Record Again
This command is available from the Actions panel menu and can be used to re-record individual step or entire action. What will be re-recorded depends on what is selected. In case you have action selected, then this command will run through all steps and allow you to change values, layer naming convention, color...

We will continue our journey with Photoshop actions with very popular step by step and precise instructions and we will record very cool actions.